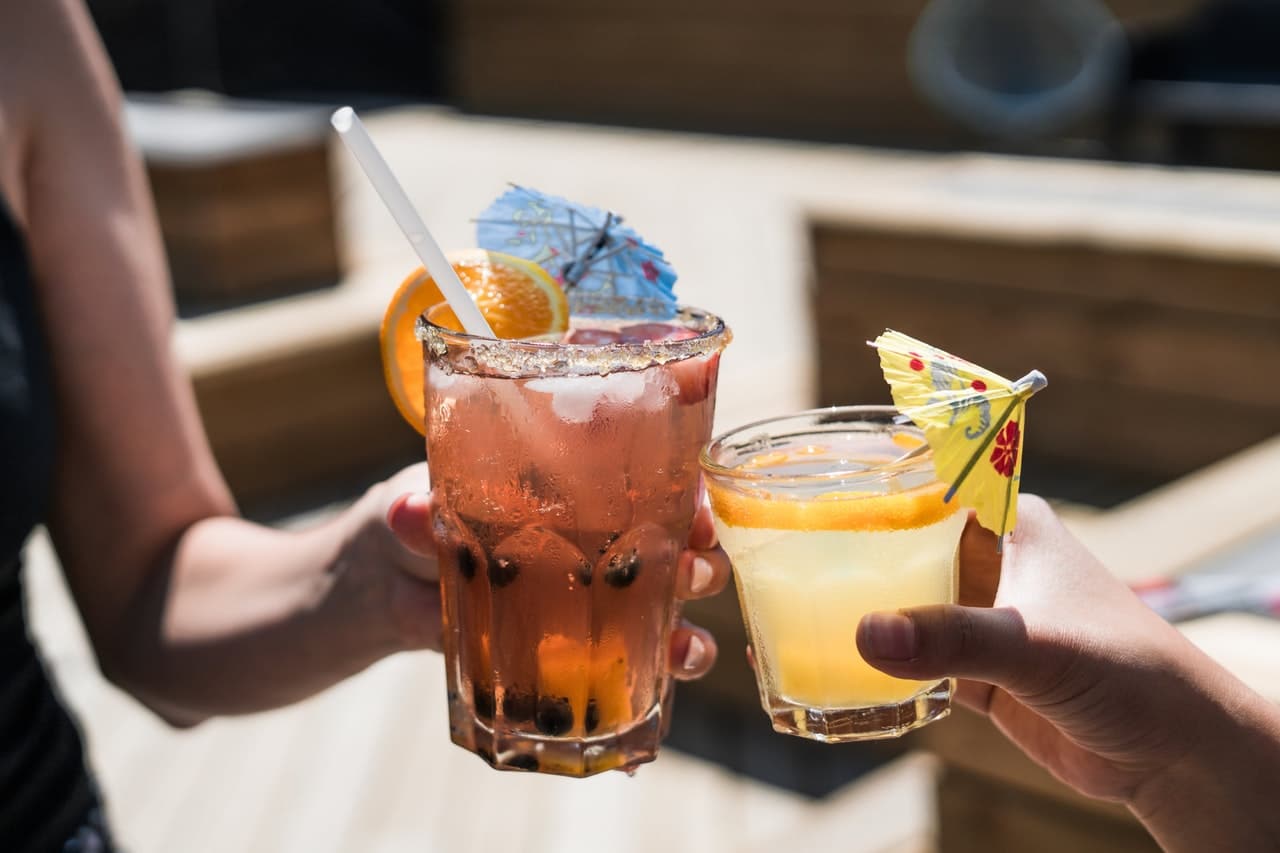 There are plenty of reasons to question the alcohol content in kombucha. For instance, should kids be drinking kombucha? What about recovering alcoholics? How about those who are pregnant? Personally, I wanted to know for health reasons. After doing some research I came out with one conclusion: most people get this dead wrong!

Most information people are providing you misleading information that can, in some cases, even be harmful.

So, how much alcohol is in kombucha?

There are two cases we need to consider – homebrew, and commercial. Commercial kombucha is strictly regulated to contain less than 0.5% alcohol content. Homebrewed kombucha, on the other hand, is far more varied. Some brews can get up to 3%, where most stay around the 1% mark. It all depends on the brewing process and ingredients (I get more into this below.)

While the alcohol content might not be that extreme, 2% is a lot of alcohol to be feeding a child. This also can become an issue if you are pregnant. This is why I always recommend testing your kombucha before serving it to children or if you are pregnant.

Let’s get into the details!

How Much Alcohol Is Actually In Kombucha?

How Is Alcohol Produced In Kombucha?

Before we can get a sense of how much alcohol is in kombucha it’s a good idea to understand how the alcohol is created in the first place.

As you well know kombucha is produced as a result of fermentation. Fermentation is the process in which yeast breaks down sugar into alcohol and carbon dioxide. The process happens without the presence of oxygen (this is key to remember.)

A related process, called respiration, takes place with the presence of oxygen and converts sugar into carbon dioxide and water.

Interestingly, kombucha fermentation uses both processes at different times during the brewing cycle.

When you first drop your scoby into the starter liquid there is plenty of oxygen available. This is when the yeast begins the respiration stage that produces carbon dioxide and water. As the yeast breaks down the sugar, the bacteria grow rapidly and constructs a new layer of scoby that covers the liquid.

Once the scoby is completely formed, the oxygen levels decrease and the yeast begins fermentation. Now the yeast starts to produce ethanol which the bacteria use to produce the natural acids that give kombucha its sour flavor.

The amount of alcohol is your kombucha is going to depend on how productive the yeast and bacteria are.

This constant balance is why it’s so hard to exactly know the quantity of alcohol in your kombucha. That being said, it’s much easier to tell for commercial kombucha.

How Much Alcohol Is In Store-Bought Kombucha?

As per TTB regulation: all kombucha sold in stores must contain less than 0.5% alcohol by volume.

In 2010, there was a federal crackdown over some hyper-fermented bottles that you may have seen in the news. It all started with a routine audit of a Whole Foods. When an inspector noticed a few cracked bottles of kombucha he began to think about what happens when you combine sugar and yeast.

This lead to samples of several brands being sent to the University of Maine where tests showed alcohol levels of 0.5% percent to 2.5%. The Alcohol and Tobacco Tax and Trade Bureau (TTB) requires anything above 0.5 percent to be regulated as an alcoholic beverage. This lead to a widespread recall of commercial kombucha.

New tests were developed and commercial brewers had to tweak their recipes. It was suggested that pasteurization be used in all kombucha brewing – essentially killing all the healthy bacteria. Without it, any bottle that sat too long on the shelf would develop alcohol levels higher than 0.5%.

Obviously, this was unacceptable. It, therefore, forced commercial kombucha breweries to come up with creative ways to lower the alcohol content while still keeping the bacteria.

These secrets are usually kept quiet, but I suspect they are similar to the ways I outline below.

How Much Alcohol Is In Homebrewed Kombucha?

The amount of alcohol in your kombucha is going to depend on the following:

Everyone’s kombucha is going to be a little different. As you can see by the number of variables above, it’s difficult to provide an average number. But, the good news is, you can easily test the alcohol levels in your kombucha so you can tweak your process.

This way, you can easily increase, or decrease, the quantity of alcohol in your brew. If you understand how alcohol is formed you can come up with ways to reduce it.

In a similar vein, the more oxygen you have the less alcohol.

So, how do we help the bacteria?

How Do I Make Kombucha Without Alcohol?

Want to reduce the alcohol content of your kombucha? Here are a few ways you can make that happen. This will result in a brew that is usually around 1% ABV or less.

1. Use An Extended Second Fermentation

Extending the second fermentation is going to leave plenty of extra time for the bacteria to convert the ethanol into healthy acids. The longer the better. I usually recommend leaving them for at least 2 weeks. Test the taste after this two week time period to make sure the brew hasn’t become too tart over time.

Fill the bottle right to the top. This usually provides a brew that is nicely carbonated and gives the yeast time to convert the sugar into alcohol – which will be gobbled up by the bacteria. It’s usually a good idea to do extended brews with kombucha that is on the sweeter side. The extra time can sometimes lead to too much acid being produced and the kombucha becoming tart.

Remember to burp your bottles every now and again. This is the best way to avoid a kombucha gyser!

2. Cut Down On The Yeast

Remember, yeast is what is responsible for the alcohol levels in the first place. Although this method may be a little tedious, I can be effective in reducing the alcohol levels of you bucha. The only downside is you will lose some of the nutrition, flavor, and carbonation that comes with kombucha.

One of the easiest ways to reduce your yeast levels is to physically remove them from your brew. After a few days, you will see the brown yeast strings forming on the bottom of your scoby. Simply pull these strings off of your scoby and throw them out. Keep an eye on the brew and remove any new strings that develop.

The third method used to cut down on yeast is to cool your kombucha down.

Kombucha likes to be brewed at 75-85 degrees Fahrenheit. Anything lower than this will slow down the yeast and prevent it from producing as much alcohol. The bacteria prefer the slightly cooler temperatures, so they will be able to convert the ethanol into the healthy acids.

I recommend moving your kombucha to a cooler part of your house. For instance, a dark basement will work just fine. Avoid placing your brewing kombucha into the refrigerator as this will only result in mold!

Once your brew is complete, this is where you can refrigerate quickly. This will stop all alcohol production in its tracts versus continuing on with the second fermentation. Be prepared for a less fizzy batch if you go this route.

How Do I Test The Alcohol Content Of Kombucha?

If you are really concerned about the alcohol levels, or if you just want to run a few of your own experiments, there are a few different ways to test the alcohol levels of your kombucha. Taking a page out of home beer brewers, we use what’s called a refractometer.

A refractometer is a basic tool that is used to measure the refraction angle of a beam of light through a liquid. In other words, it can accurately calculate the alcohol levels in different fluids – including kombucha.

There are other methods, such as hydrometer and near infrared, but both are either too inaccurate with kombucha, or too expensive.

How Do I Make Kombucha With More Alcohol?

Increase the yeast count, raise the brewing temperatures, and wait until you refrigerate the bottles from the second ferment.

2 thoughts on “Does Kombucha Have Alcohol? Your Questions Answered”